For the political analysis of the final forecast, go here.

This post is a very technical discussion explaining how to run the model and reproduce the results of the final forecast.

Election polls are possibly the clearest and most public example of statistics that we encounter in our lives. We depend on them, as voters (or candidates), to understand where the election stands. They can contribute to tactical voting on the voters’ part, and can influence decisions on the part of candidates and politicians. But what do they mean? How does the margin-of-error figure into the numbers? What are we to understand if two polls have conflicting results? Here in Israel, the issue is even more pronounced: It is 2019, and there are currently over a dozen parties that have some viable chance of receiving some seats in parliament (called the Knesset). But a whole bunch of them are trailing near the “threshold.” The threshold - at 3.25% - means that if a party does not pass the threshold, its votes are divided up amongst the other parties using a complex algorithm called Bader-Ofer. Multiple polls taken at the same time might show different parties passing the threshold, and this naturally affects the final results.

This is the purpose of pyHoshen. pyHoshen is a framework for Bayesian MCMC election-polling written in pymc3. pymc3 is designed as an “Inference button” - just write the statistical model in high-level python and push the “Inference buttom” and it translates the code into a Bayesian MCMC model. Computing the model might take some time, but pymc3 uses C++ and the GPU to provide extra computational speed. Similarly, pyHoshen attempts to be the “Inference button” for election-polling - just feed in the polls and set up the election parameters, and it translates the polls into the statistical model for pymc3. This is a work-in-progress and contributions and comments are welcome!

It is important to understand - the model is a complex “poll of polls.” Whereas other poll of polls might provide a simple average, pyHoshen can account for correlations between parties and potential house effects of pollsters.

However, the model does not contain more information than the polls themselves. It is still just an elaborate poll of polls. If all the polls are wrong, or if the polls are on average wrong or off by some percentage points, the model will be wrong too.

So how do we run it? The following code was run on Google Colab, a free cloud computational environment. We start with the following initialization block which clones the pyHoshen repository and sets up the environment. I also authenticate to google for google docs, in order to access the polls database which is hosted at google sheets. Finally, we check the uptime. Google Colab only allows 12 hours of use at a time, and running the model can take over an hour or more. So if the uptime is close to the limit, it might be a good idea to reset the runtimes.

Having initialized let’s set up the model. Let’s go through the initialization parameters:

All good, so let’s run it! The particular technical options below are useful to deal with some diagnostic warnings. In particular, “cores=2” forces google to run the two chains concurrently. Google Colab only has one CPU so pymc3 would normally run two chains sequentially by default. However, in my experience, “cores=2” runs faster (and possibly less buggy). In total, we will run 9,000 random scenarios or “draws” - 4500 on each of the two chains running concurrently. The first 2000 draws of each chain are used for tuning and discarded. They allow each chain to reach convergence to the final result. The final 2500 samples from each chain are going to constitute our final results, for a total of 5000 samples. Each of this sample is a unique possible way the election campaign could have unfolded to provide us the polls we see.

The model took us about 2.5 hours to complete! pymc3 will usually perform some diagnostics and warn us of them, if the model did not converge properly, for example. These warnings can imply errors or shortcomings in the model itself. But there are no warnings, meaning the model converged properly.

Analyzing and Visualizing the Results

The results we sampled only contain percentages of the various parties. As mentioned above, the Israeli parliament (Knesset) assigns seats based on an algorithm called Bader-Ofer, and election-polls are published using these Knesset seats. To convert the percentages we received to seats, we now compute the Bader-Ofer seat allocation for the entire trace. The trace is the set of all samples we got. Each of these samples contain a separate state of elections on each day of the election up to the forecast day. So we now run the Bader-Ofer algorithm separately on each of the days of each of the 5000 samples. We do it now because this is a heavy computation that is not necessary during the main run and would just slow down the computations. The model is a statistical model and uses a multivariate Student-T distribution to model the polls, and this requires percentages, not parliament seats.

So now we have the results! What can we see? The most standard display of poll results in Israel is the mandates bar graph. So we can just plot these. 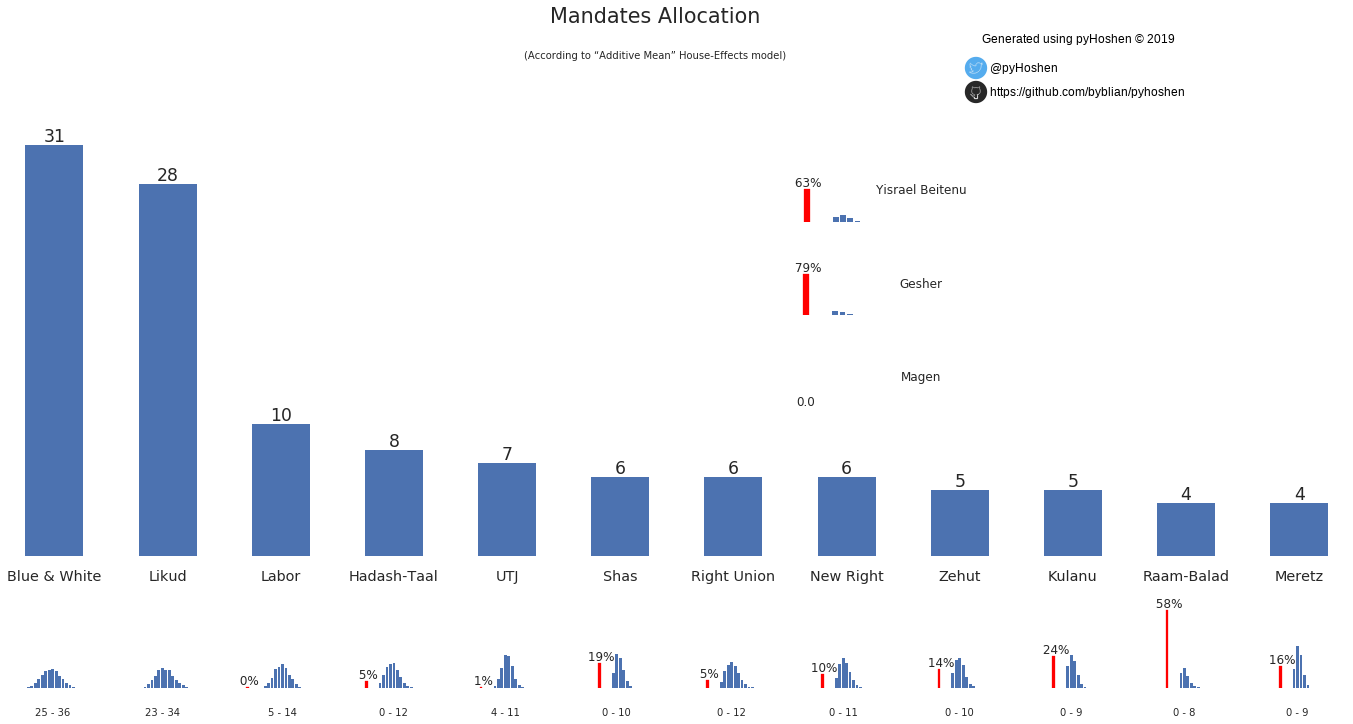 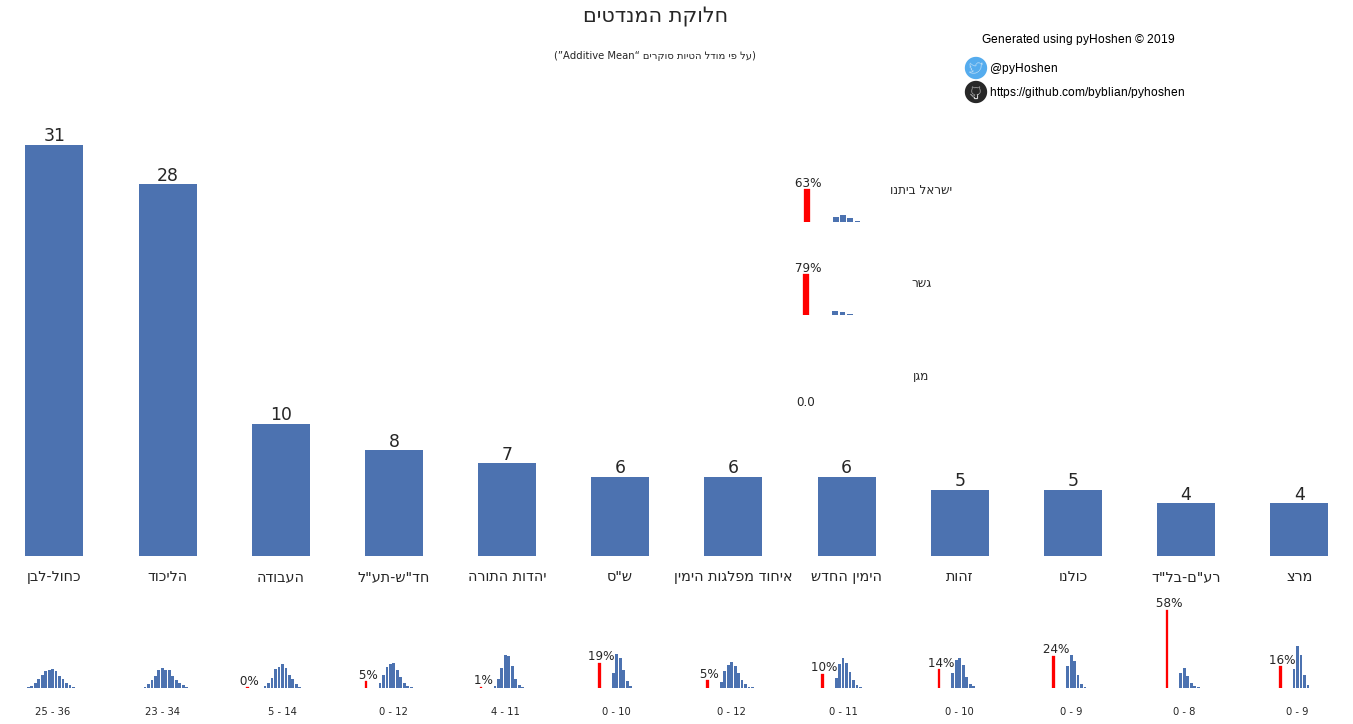 Showing the distribution graphs for each party is nice but we also want to provide one final result. After the actual election, we might compare this final results to the true election election by determining the “error” it has – how far it is from the real true election results. A “Don’t be right, be smart!” approach is employed and the result that is presented is the one that has the lowest average “error” as compared to all other potential results.

Israeli elections are based on the formation of coalitions. To this end, we have coalition graphs, to see which potential coalitions are viable.

Based on the results above, it appears that the Likud has a good chance of forming a right-wing coalition. Furthermore, the average coalition size is 66 - suggesting that small parties that get 4 or 5 mandates would have less bargaining power during the coalition negotiations.

But our model did not just compute the final results, it also computed the results over time. We can plot these as well. 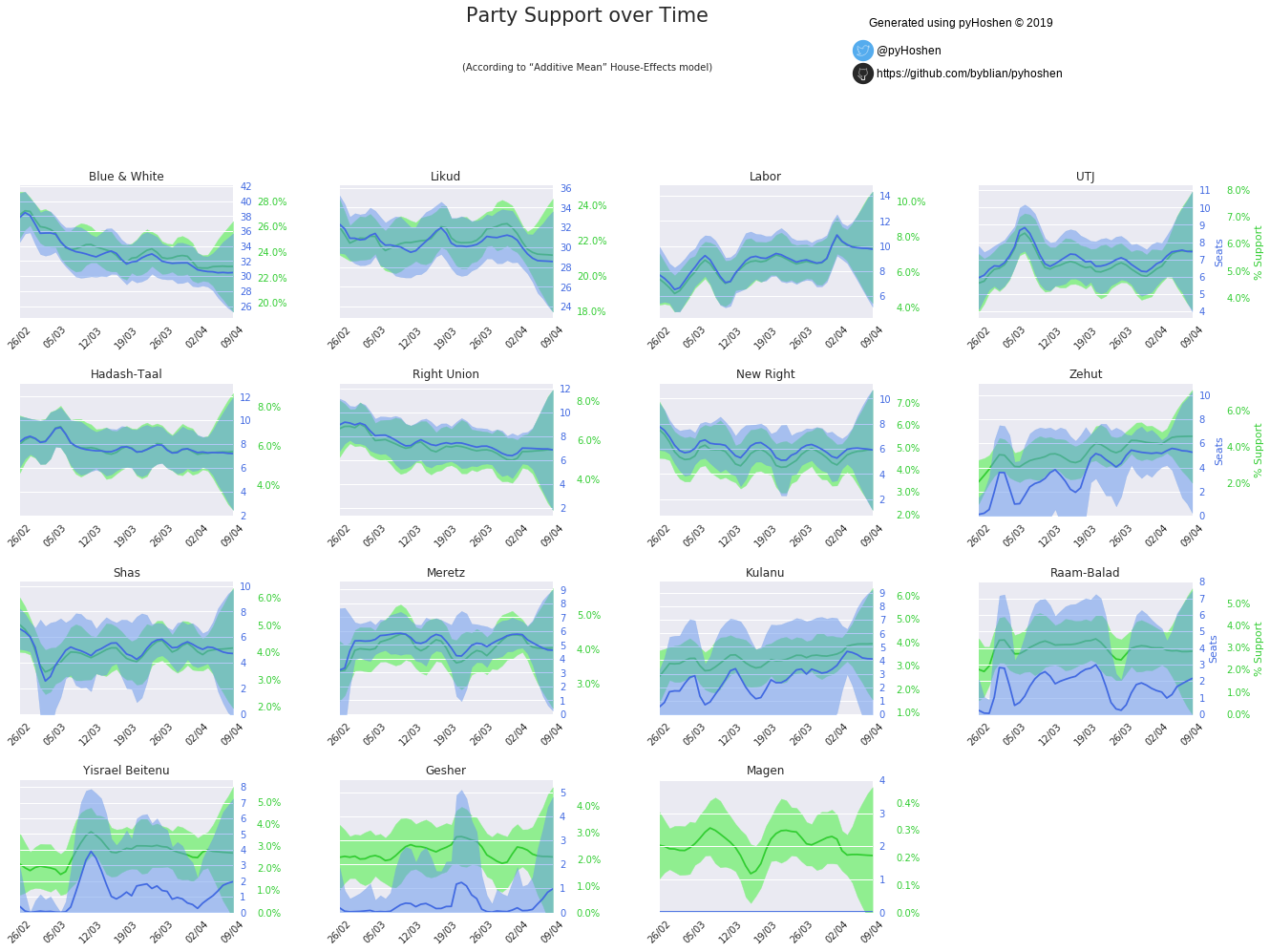 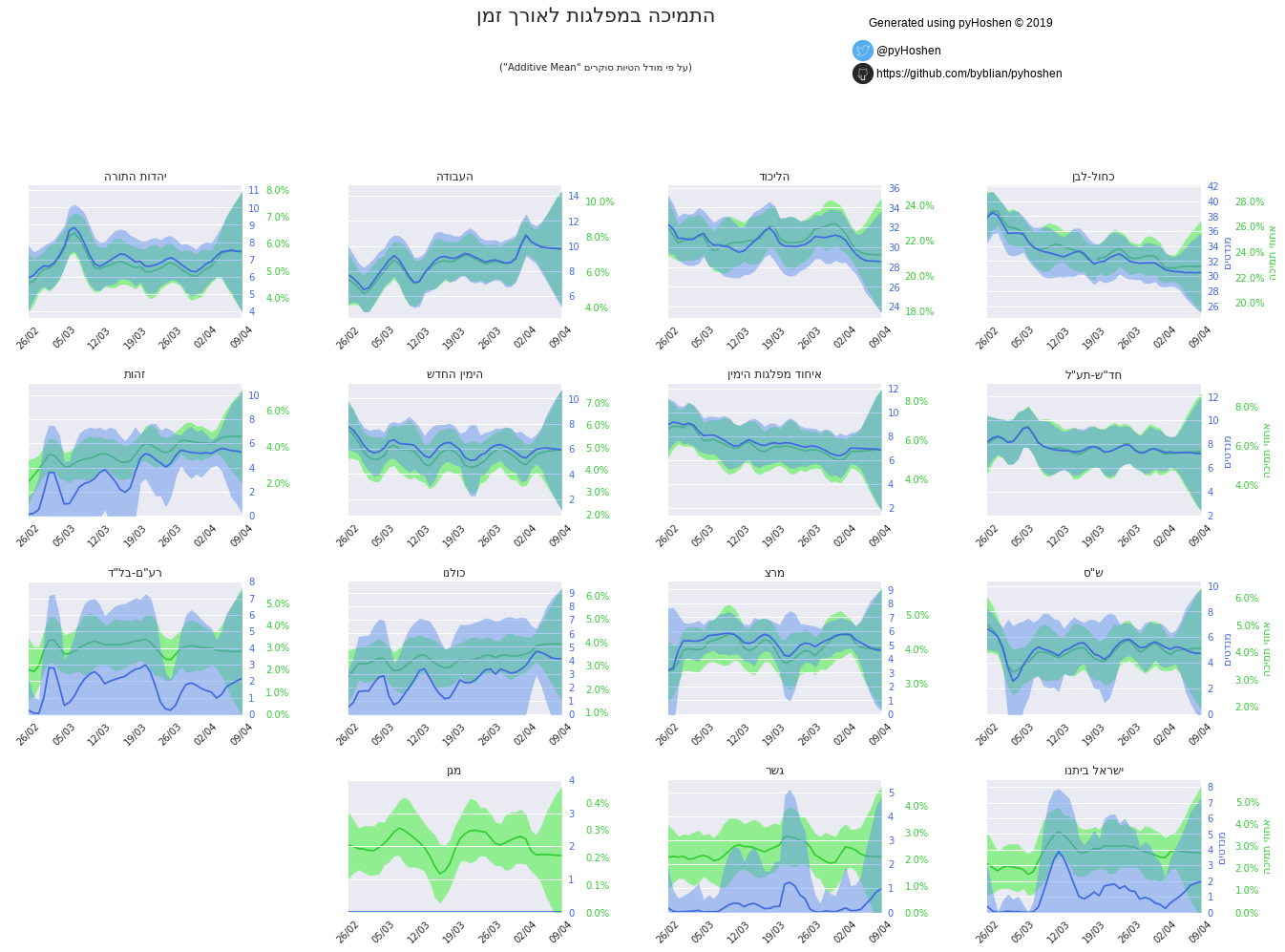 Most striking in the above graphs are the great uncertainty that develops over the last few days. In terms of a long-term outlook, we can see that Labor slowly rises as Blue & White slows decreases in power.

The model also computed house effects so we can display these. We can see, for example, that “New Right” has a 0.26% extra house effect in “Direct Polls,” who is also that party’s private pollster. This translates to approximately a third of a mandate (1/120 = 0.83%). Similarly, a pollster called Miskar that published results only twice (and of these only once with full information), gave Zehut 7 mandates when everyone else gave it none. We see their house effect for Zehut is 1.71% - indicating heavy bias in favor of Zehut.

Finally, we can plot our correlation distributions. Some of these make sense, while others do not. The model tries to make the best of what it can determine from the polls. With over a dozen parties competing, the model might make some false associations due to parties going up or down in polls the same day. It is a best effort, but in my opinion, better than simply assuming the respective party supports are totally unrelated. As an example, we can see the model was able to find heavy negative correlation between the two primary Arab parties - Hadash-Taal and Raam-Balad. This can be explained in terms of a common voter base, where their voters might choose one or the other. This in turn is taken into account when computing the final results. Thus, in the final mandate results, we might find either Hadash-Taal doing or Raam-Balad doing better. But the model would not simply randomly provide increased support for one or the other. It would come at the expense of the other. 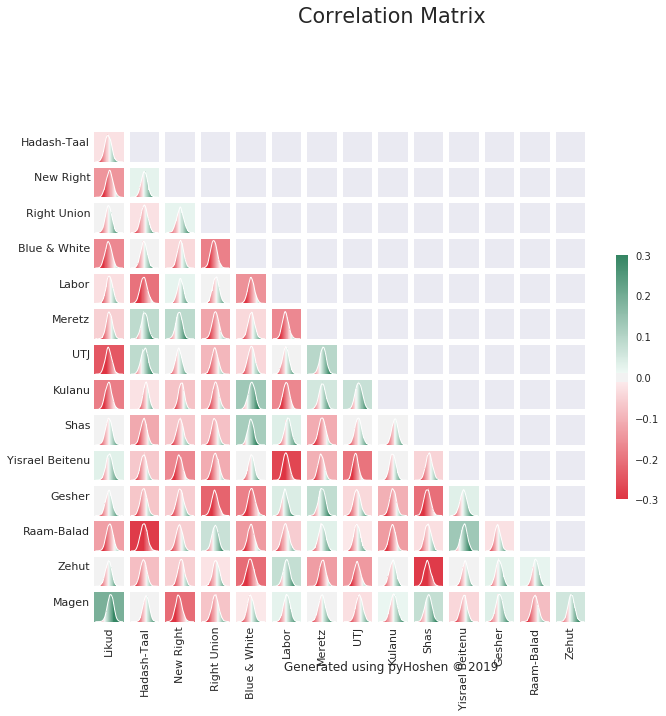 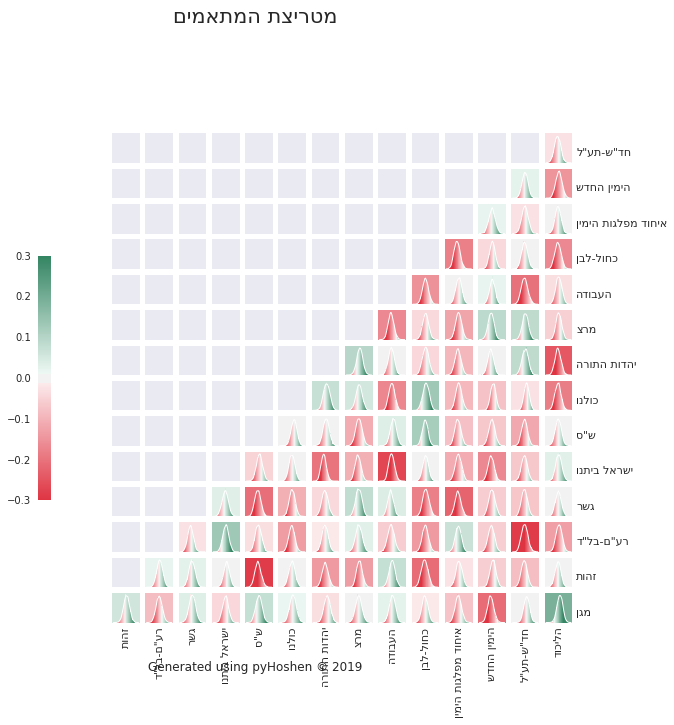